Adams, Douglas. So Long, and Thanks for All the Fish. Harmony Books, 1984. U.S. hardcover edition, 2nd printing. Has some notable dust jacket tears and overall isn’t the nicest copy I’ve ever seen, but it was also signed by the author. Fourth in a five-book series.

McKillip, Patricia A. Harpist in the Wind. Del Rey, 1982. Mass market paperback; fifth printing of the Ballantine edition. Inscribed by the author on the inside front cover: “Damon / best wishes”. Locus Award for Best Fantasy Novel; Hugo finalist. Third in a trilogy. No. 412 on Mt. Tsundoku.

Varley, John. Demon. Berkley, 1984. Trade paperback. Third in a trilogy. Per ISFDB, the Berkley trade paperback was published simultaneously with the Putnam hardcover. No. 1114 on Mt. Tsundoku.

Then Half-Price Books had a bunch of daily coupons:

Jordan, Robert. New Spring. Tor, 2004. First edition hardcover. Prequel to the fourteen-volume Wheel of Time. I’ve been gradually working on obtaining all of these. Mostly a question of condition/price at this point given that everything I don’t have is either pretty common or hilariously expensive.

McGuire, Seanan. One Salt Sea. DAW, 2011. First edition mass-market paperback. Fifth in the October Daye series, which is at twelve books and counting. Like the above, I’ve been gradually working on obtaining all of these, although due to being mostly paperback and it’s a lot cheaper. 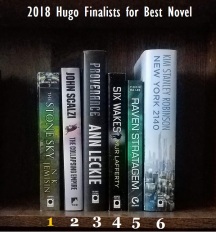 Finally, the Friends of the Sunnyvale Library book sale continues to provide extremely discounted comic book collections. All of these are ex-library and usually not in the greatest shape but … this in total cost $14.50: